An endmill is a cutting tool used in industrial milling applications. It is distinguished from the drill bit in its application, geometry and manufacture. While a drill bit can only cut in the axial direction, an endmill can cut in all directions.

Refer to our endmill basics and selection guide to learn about the several broad categories, and how they’re best used.

Square Endmills have a 90-degree profile. They are used for all-around milling.

Weldon Shank Endmills are produced with a Welden flat to prevent any slippage.

Corner Radius Endmills have a rounded corner to cut a specified radius.

Finisher Endmills provide a smooth and polished finish in a single pass. Not suited for plunge cutting.

Drill Mills are used for spotting, drilling milling, and countersinking. Not recommended for drilling steel.

Roughing Endmills also known as hog mills, are used to remove a large amount of material in a single pass. Roughing endmills are available in course and fine pitch.

Corner Rounding Endmills are used to mill round edges. The end of the tool is strengthened to reduce chipping.

Undercutting Endmills are also known as lollipop cutters. They are versatile tools with many uses. 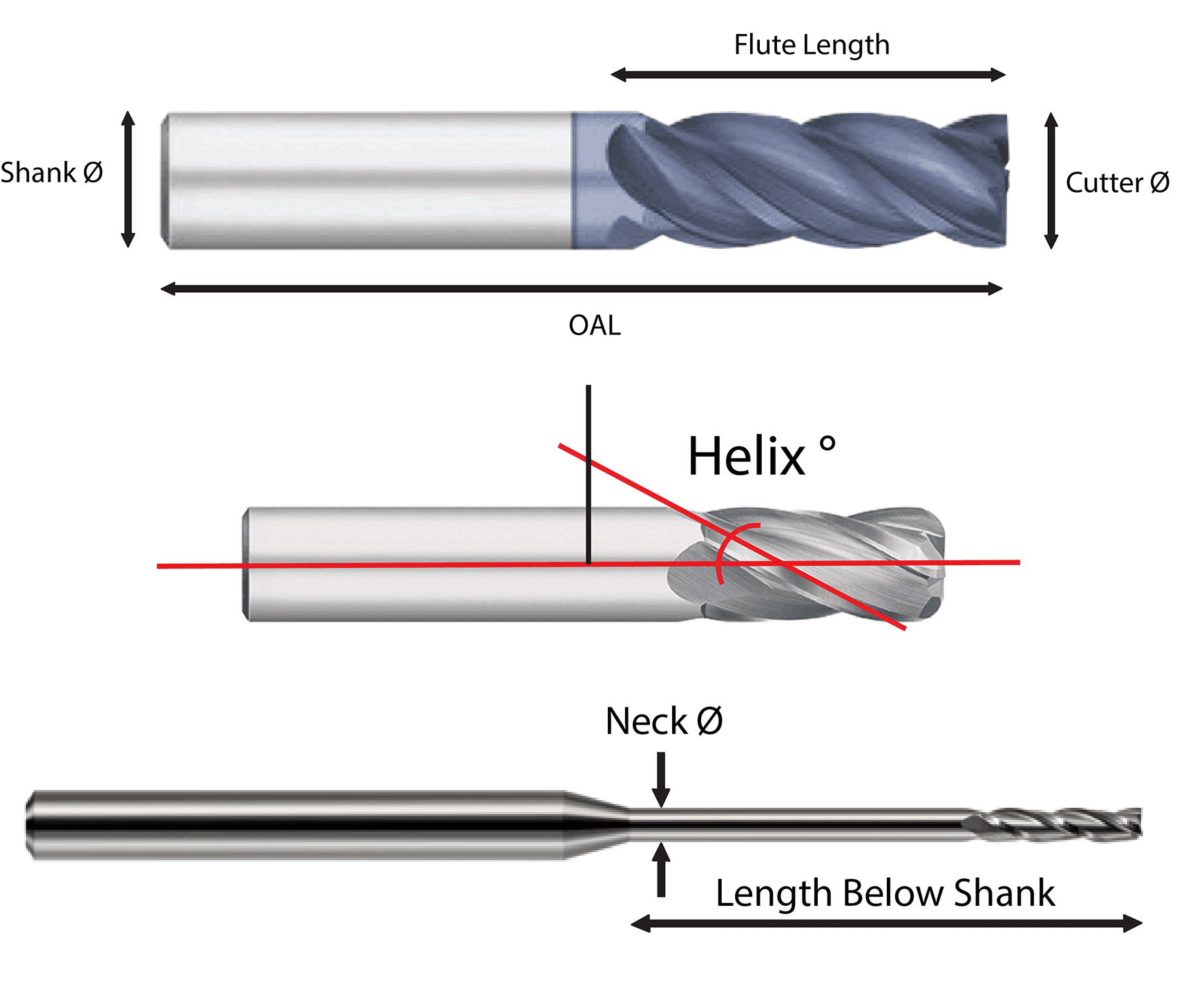 Anatomy of an Endmill

Cutter Diameter: The diameter of the theoretical circle formed by the cutting edges as the tool rotates.

Shank Diameter: The width of the shank that is held in the toolholder.

Overall Length: The total length of the tool between both axial ends.

Length of Cut/Flute Length: The functional cutting depth with the tool in the axial orientation.

Length Below Shank: Also called the reach, is the length from the necked portion to the end of the cutting end of the tool.

Neck Diameter: The diameter of the neck.

Helix Angle: The angle measured from the centerline of the tool and a straight line tangent along the cutting edge.

Flutes: The spiraled cutting grooves in the tool. Fewer flutes allow for larger chips and a deeper cut depth, but are weaker and best suited for plastics and aluminum. More flutes increase the tool strength but reduce the cutting depth for a smoother cut better suited for harder materials.

Variable Pitch: Refers to cutting edge spacing that is unequal. On a standard 4-flute tool the cutting edges would be 90 degrees apart. By creating an endmill with unequal pitch some more some less than 90 degrees, the cutting forces are changed which results in reduced vibration, higher feed rates and better part finishes.

Three Flute: The same space between flutes as the two-flute endmill, but are stronger. Used for ferrous and non-ferrous materials.

Four Flute: Stronger than the three-flute endmill allowing for faster feed rates. They have less flute space than the 3-flute endmill and produce smaller chips. These are most often used when cutting ferrous materials.

Six Flute and Above: These are finisher endmills that produce a very fine finish. They are also commonly used in dynamic or high-efficiency machining (HEM).

Solid Carbide: Is more rigid than high-speed steel (HSS) and can be run 2-3x’s faster. They are also extremely heat resistant and perform well with cast iron and non-ferrous materials.

Coatings play a crucial part in the performance of your cutting tool, however, tool geometry is just as important to be successful. These are the best coatings for a given application:

HEM is a method of milling that has gained considerable popularity because of the increase in shop efficiency, extended tool life, improved productivity and cost savings. Most CAM packages offer modules that generate HEM tool paths. In HEM, a lower radial depth of cut and higher axial depth of cut is utilized. This allows for the entire cutting length of the tool to be used, spreading the heat and wear over the surface which increases tool life. It also works on the theory of Radial Chip Thinning. In this method, a smaller radial depth of cut allows for increased efficiency of chip removal. The CAM application can then increase the load on the tool throughout the roughing process, resulting in aggressive material removal rates. RedLine Tools has a large assortment of endmills that are perfect for this methodology.

We hope this endmill selection guide helps you find the right tools for your job.